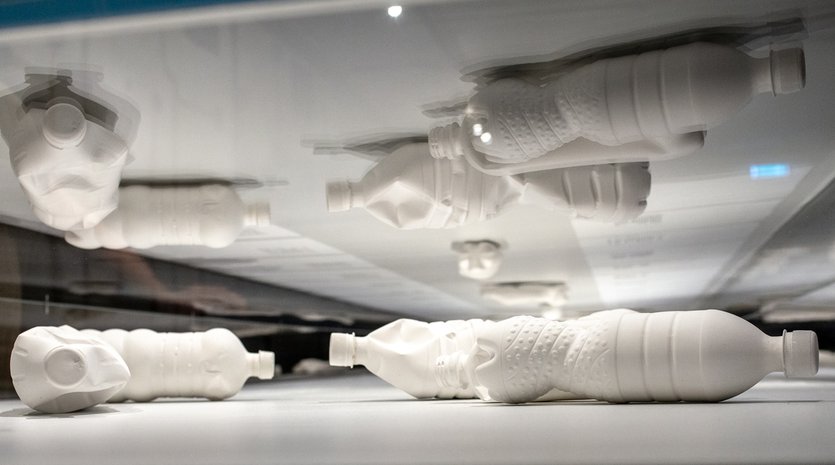 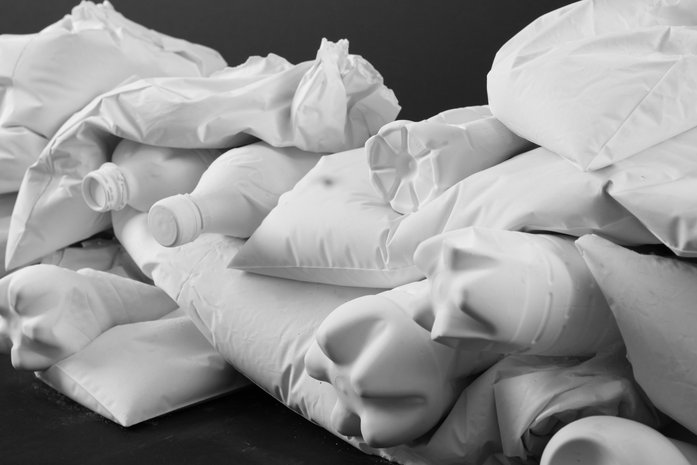 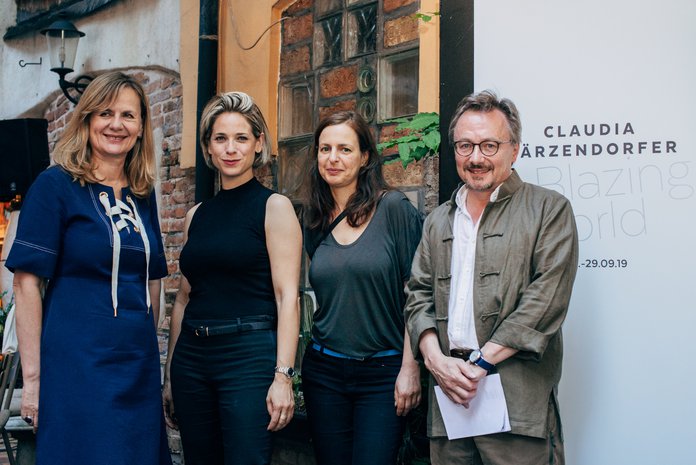 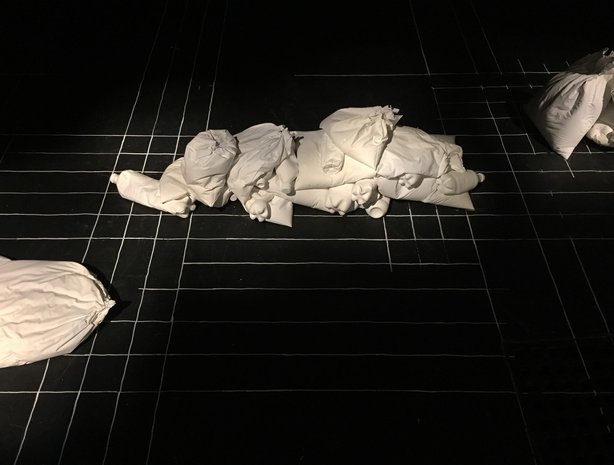 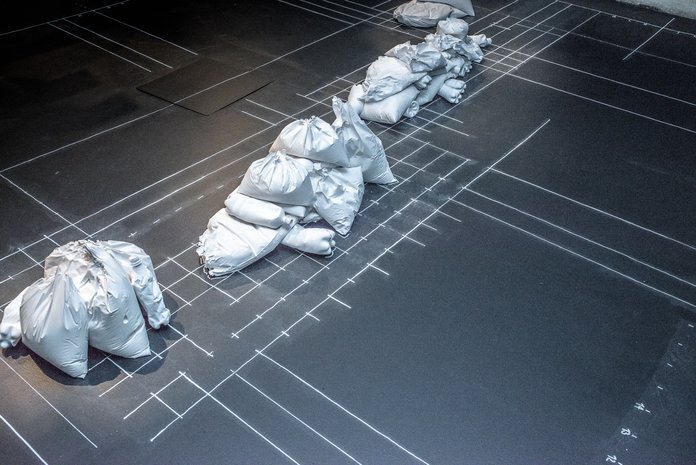 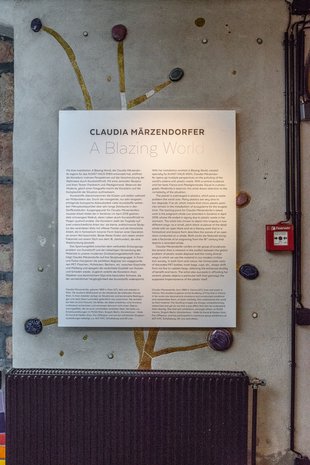 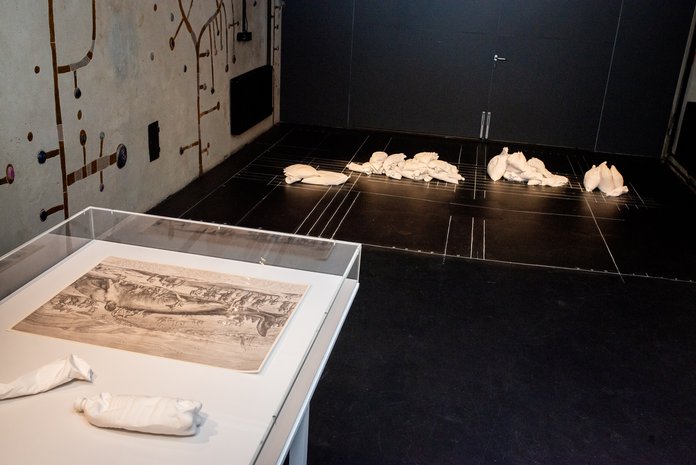 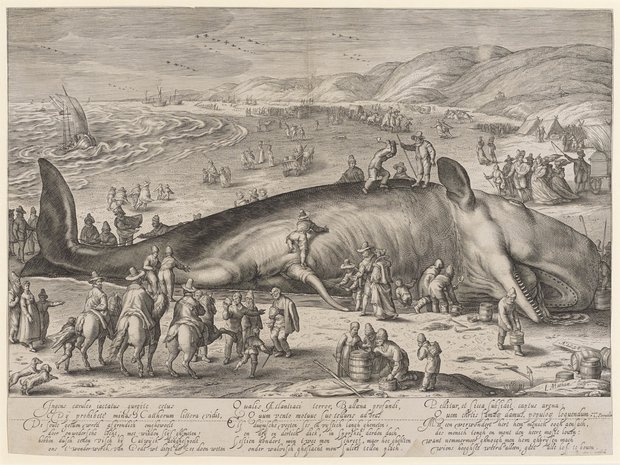 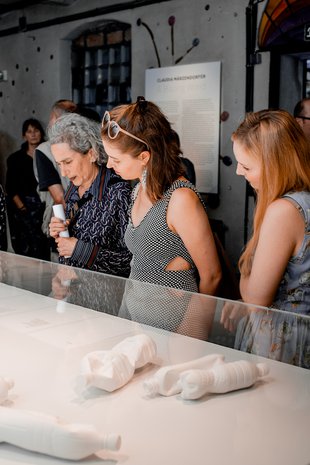 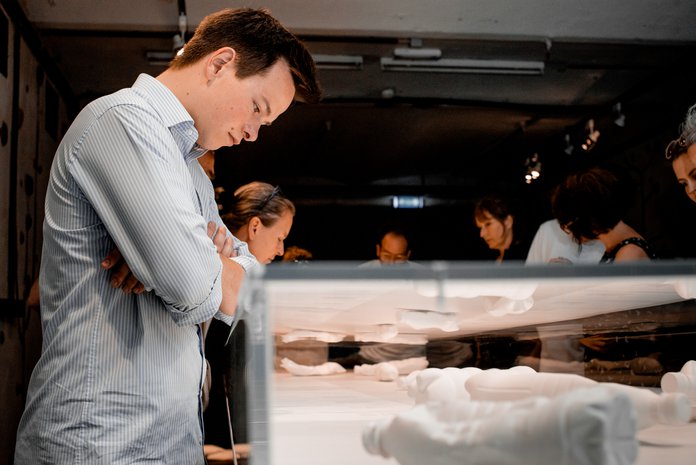 With her installation entitled A Blazing World, created especially for KUNST HAUS WIEN, Claudia Märzendorfer opens up multiple perspectives on the polluting of the world’s oceans with plastic waste. With a central sculpture and her texts France and Plastiglomerate. Equal to a photograph, Modernity’s reservoir, the artist draws attention to the complexity of the situation.

The planet is submerged in plastics, which pose a waste problem the world over. Many plastics are very slow to bio-degrade, if at all, which means that micro-plastic particles remain in the metabolism of ecosystems for the longest time. The starting point for Claudia Märzendorfer’s latest work is the pregnant whale cow stranded in Sardinia in April 2019, whose life ended in agony due to plastic waste in her stomach. The artist has chosen to depict this tragedy in two different ways: as a small, pitch-black sculpture of the dead whale with an open flank and as a literary work that in a fantastical and bizarre form describes the scenes of an o eration conducted on a whale. Both works are featured alongside a facsimile of an engraving from the 16th century that depicts a stranded whale.

Claudia Märzendorfer confers on her group of sculptures the tension that is inherent in the conflict between the global problem of plastic waste disposal and the many diverse ways in which we use the material in our modern civilisation society. In both form and colour, her immaculate casts of discarded PET bottles, trash bags, cups, etc., shape-shift from ice floe to rubbish heap, reflecting the enhanced duality of benefit and harm. The artist also succeeds in affording her ceramic plaster objects a particular heft that gainsays the supposed impermanence of the plastic itself.

Claudia Märzendorfer, born 1969 in Vienna (AT), lives and works in Vienna. She studied sculpture at the Academy of Fine Arts in Vienna. In her works she deconstructs situations and constructed conditions and reassembles them, at least mentally. She understands the world as (her) material. The resulting images are always comprehensively researched and yet do not lack a pop effect that lets her understand them directly. She held solo exhibitions, amongst others, at MUSA Vienna, Singuhr Berlin, Künstlerhaus - Halle für Kunst & Medien Graz, Fox-Offspace; and has participated in numerous group exhibitions at ACF NYC, Schallaburg, OK Linz and others.