Hundertwasser and his visions in green 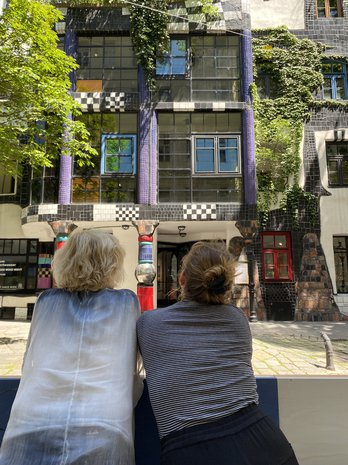 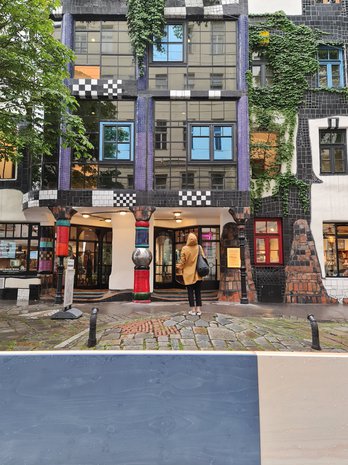 Hundertwasser in harmony with nature

The following articles are taken from the book "100x Hundertwasser. Artist - Visionary - Nonconformist" by Caro Wiesauer

That one could live happily and self-sufficiently without money, that one should be independent and not allow oneself to be exploited, was the core message of the manifesto that Hundertwasser read out on the occasion of the legendary "Nettle Action" in January 1969 as part of the "Anti-Procès", an artistic demonstration against the Algerian War, around Alain Jouffroy in the Galerie Quatre Saisons in Paris. "Do you know how easy it is to live without money. All you have to do is eat nettles. (...). They are completely free." In a very concrete way, he was denouncing the dependence of artists on the art market.

The action, which lasted a few hours and involved several artists - including Jean-Jacques Lebel - took place two years before the first happening of the Vienna Actionists.

Nettles that Hundertwasser had picked behind the Palais de la Porte Doreé were boiled in a large wash kettle and then distributed to the public. Hundertwasser himself ate three stinging nettle perennials. - Because there were still traces of cleaning agents in the cauldron, they tasted like soap and made him sick.

Hundertwasser also addressed the audience at that time with an improvised speech in which he spoke about Chinese imperialism, which was just beginning to dominate Tibet. At that time, the most discussed political topics were Vietnam and Algeria, but nobody talked about the Tibet uprising. Hundertwasser was well informed and told exactly what was happening there. The passion with which he did this fascinated the listeners.

Green roofs are a contribution to ecological balance in urban areas and can make a notable contribution to biodiversity in heavily sealed areas." A quote that could have come from Hundertwasser's book "Roof Greening" (1986). It is taken from the guide published in 2009 by the Vienna Environmental Advisory Service. Today, it is not only private individuals who often address the wish for a grass roof to ecologically oriented architects. They are also increasingly being installed in the public sector for renovations. Hundertwasser recognised the benefits of green roofs for nature and people as early as the end of the 1960s, and in the early 1970s he showed the possibility of roof forestation in the first models. From 1978 onwards, he designed the Hundertwasserhaus in Vienna in such a way that the entire horizontal built-up area was returned to nature. "Green roofs are the roof coverings of the future." Having a forest on the roof or a wild meadow or a vegetable garden will be taken for granted, he said. "As an artist, I am always aware that the creativity of nature and the creativity of man must be reunited if we all want to survive as the image of God on this earth (...) We have lived too long according to the maxim: Let us subdue nature. Now it is time for us to reverse this aberration."

Hundertwasser summarised his idea of a life in harmony with the laws of nature in seven points:

Karls Garten: Relaxing next to herb towers in the middle of Vienna.

This is where Hundertwasser's urban ecological thoughts and recycling ideas are put into practice in a contemporary way: a hotspot for agriculture on Karlsplatz in Vienna, where avalanches of cars roll by day and night. Founded in 2013 on an association basis, "Karl's Garden" is now not only a popular meeting place for urban gardeners and supporters of the zero-waste movement, who can find valuable tips from experts here. In the warm seasons, you can also just relax on green pallet furniture and enjoy the view of herb box towers. "Karl's Garden" is an experimental laboratory for old plant varieties and rarities as well as for scientific research on the effects of fine dust and heavy metals on substrates and yields. The research carried out is accompanied by universities and recorded and evaluated in studies. The effects of green areas on the urban climate are also examined. In addition to a research and display garden, there is a bee pasture, a vineyard, a cereal mound and a green belt of plants that isolates the garden from traffic and is suitable as a fine dust trap - all this on only 2,000 square metres. Incidentally, Karlsplatz was also used for agricultural purposes in the past. At the beginning of the 19th century, goats still grazed here along the Vienna River, which was later banished underground.