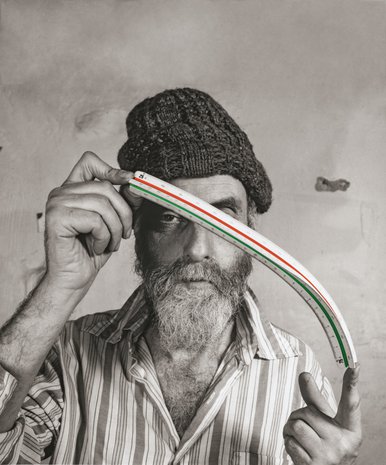 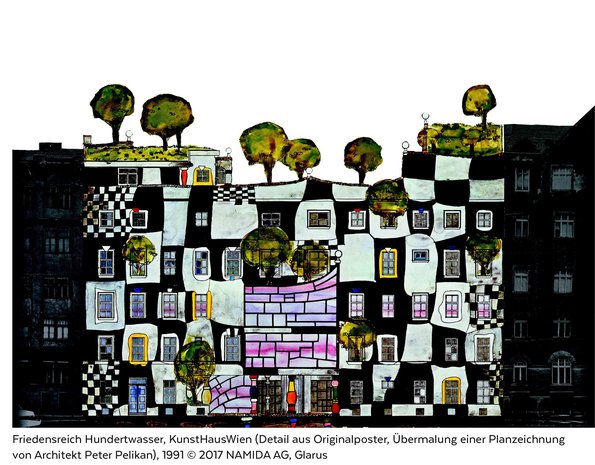 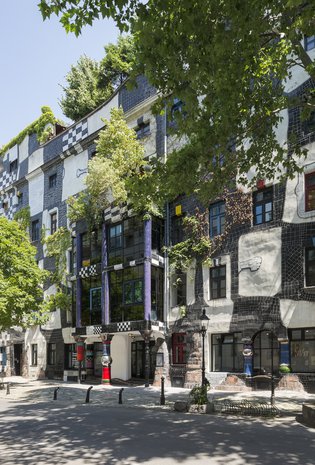 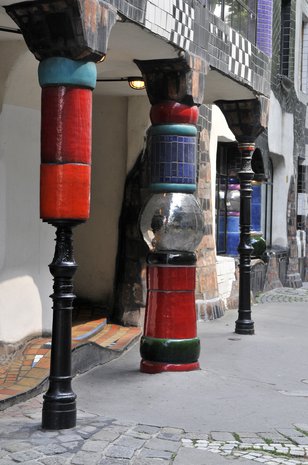 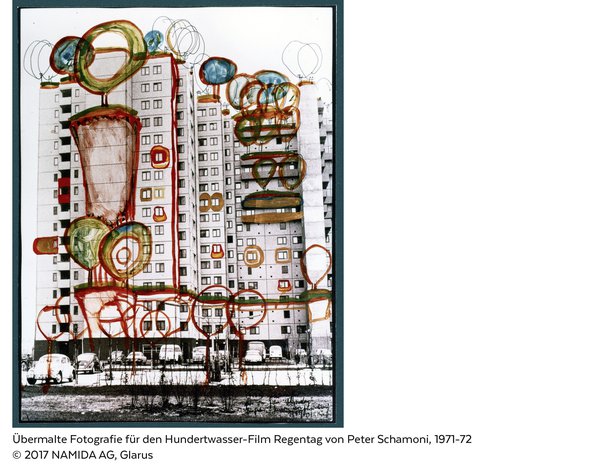 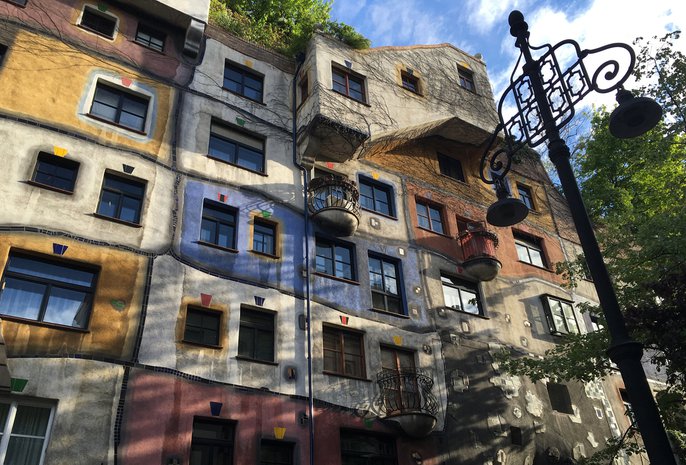 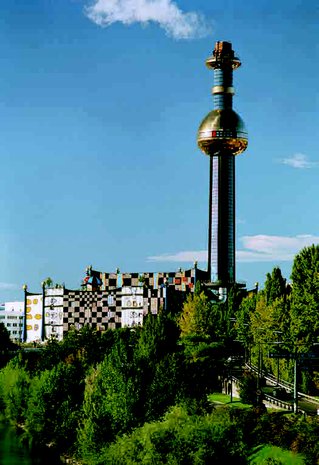 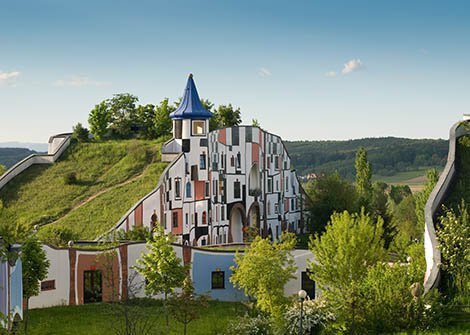 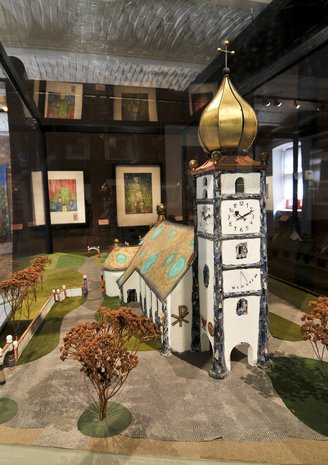 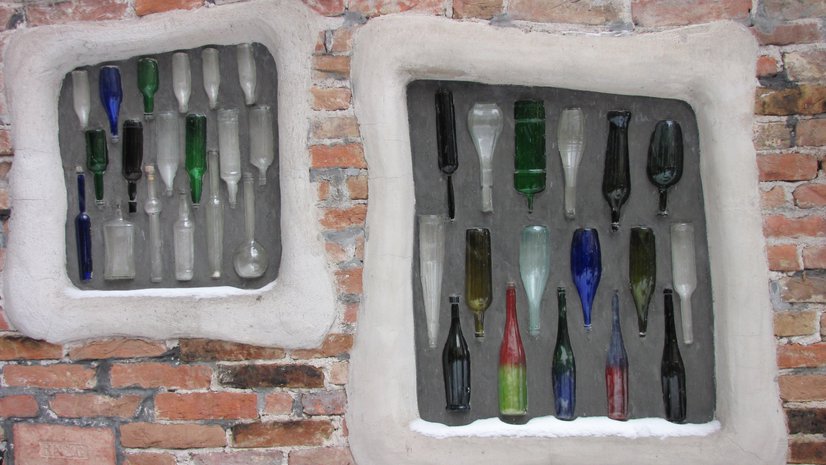 Everything which is horizontal under the open sky belongs to nature.
Friedensreich Hundertwasser, Concrete Utopias for the Green City, 1983

Starting with the Mouldiness Manifesto against Rationalism in Architecture, in which he opposed the “straight line” and demanded freedom to build for all people in 1958, Hundertwasser followed up with Speech in the Nude for the Right to a Third Skin and the manifesto Loose from Loos, increasingly and ever more profoundly writing against the building culture at the time, which he deemed nature- and people unworthy. He was a visionary in the areas of architecture and ecology, and it took accordingly long until he was able to implement his demands for “tree tenants”, the “window right”, “roof forestry” or the “uneven floor” in real life. Not all utopias that Hundertwasser had envisioned in the area of nature-friendly construction withstand today’s scientific criteria. However, this does nothing to undermine his merits in rooting ecological thinking in people’s minds.

This subsidised apartment block in Vienna’s third district was the first project in which Hundertwasser was able to materialize his architectural visions (architects: Josef Krawina and Peter Pelikan). Following completion of the structural work, he laboured side by side with the workers on the construction site every day for a year. The windows are irregularly placed, trees integrated, and the floor is partly uneven. The roofs are green, halls were designed as arcades, and the terraced, intricate layout is crowned with a gold-plated bulbous spire. After the official opening in the year 1986, dozens of other buildings were created across the globe, even some whose planning- and construction phases took place in parallel.

Among the architectural models displayed at the KUNST HAUS WIEN is the one for the heating plant Spittelau: a project that succeeded the “Hundertwasserhaus” in Vienna and caused the most heated discussions ever to have surrounded the work of the “architecture doctor”. In 1987, he was invited to submit a design for the power plant that had previously burnt down. Local initiatives wanted to prevent the rebuilding, architects and media representative were appalled by the fact that millions of Schillings were to be made available to “decorate the mud-slinger”, and ecology groups felt that the project betrayed the green ideology. After taking some time to consider, Hundertwasser finally accepted the task after he was promised that the heating plant Spittelau would become the most modern and clean waste incinerator in all of Europe. He saw it as “a first call for a more attractive, waste-free environment” (letter to Hannes Minich, 1988). Like the “Hundertwasserhaus”, the building and its gleaming chimney measuring 126 meters nowadays ranks among the city’s landmarks and tourist attractions.

A somewhat different architectural model is the church St. Barbara in the town of Bärnbach, which was remodeled according to designs by Hundertwasser from 1987 to 1988 in the course of necessary renovations (architect: Manfred Fuchsbichler). Though he renounced a fee and even paid for the bulbous spire’s gold-plating, the project in Styria could only be financed as a joint effort involving the municipality, diocese, parish, and population. The church surroundings also include a processional route with twelve arches showing the symbols of ten non-Christian world religions. Hundertwasser, who often worked on the construction site from morning till night, referred to the task of designing a church as the best present he had ever received in his entire life.

The meadow hills model at the KUNST HAUS WIEN was originally created in 1989 for a housing development planned on the outskirts of Vienna. In 1993, Hundertwasser and the architect Peter Pelikan picked up on the idea again and adapted the model for the thermal village Blumau. Next to already familiar creative elements, various housing opportunities for guests in the thermal oasis landscape were constructed: underground “forest yard houses” that obtain their light via interior courtyards were modeled after pit-houses in China and Tunisia. The “slit-eye houses” have, on the one side, a façade that lives up to their name, though the buildings themselves are deeply rooted in the ground. Their interiors are nevertheless brightly lit. The green “shifted hills houses”, finally, can be entered at ground level from anywhere. In the summer, goats, sheep, and chickens graze on them. This is Hundertwasser’s largest inhabitable total work of art.